PR that has Oomph!

Founder of Springup PR
PR that has Oomph! 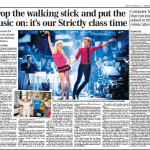 Photo-feature in the Daily Telegraph, secured for our client, Oomph, by Springup PR

Oomph! is the most exciting provider of fun and “funky” activity classes and programmes to residents in UK care homes across the care sector.

Founded by entrepreneur, Ben Allen, the multi award-winning social enterprise approached Springup PR as it wanted to use national, trade and regional media to boost significantly its profile among target audiences, and help propel the business forward with its growth plans.

Charged with a three-month campaign, we set to work developing a strategy, storylines and “angles” with impact that would grab the attention of journalists and editors of target media, and achieve desired results.

Within three months we’d achieved the following exposure for Oomph!

·      Photo features Oomph! in the Daily Telegraph and Guardian, focusing on how Oomph’s fitness classes were “sweeping the country”

All coverage was 100% positive for Oomph, and focused on the health and wellness benefits that Oomph! was providing for older adults around the country. This was exactly the reputational message Oomph! wanted to convey.

Importantly, Oomph! gained numerous sales leads as a result of the exposure.

Ben Allen said: “More than 150,000 participants have already benefited from Oomph! in more than 800 care homes and this figure is set to more than double in 2015.

“We are grateful to Springup for the support and help they have given us and we are looking forward to an exciting journey ahead. We are committed to helping older adults put some real Oomph! in their lives every day.”

Below, Oomph featured on ITV television.