Discover how your care home can reach 19,782 Facebook users in 7 days

Do you want your care home Facebook page to take off to record-breaking heights?

Do you want to reach tens of thousands more prospective families and local audiences via Facebook?

Do you know – in your heart – that Facebook is an ever-more-vital platform to tell target audiences, including prospective families, about the quality care your home provides?

And here’s how “Accelerated Engagement” works.

First off, you’ve got to be strategic and come up with a stellar creative idea.

We helped a care home in Staffordshire use Dementia Awareness Week as a hook to promote its quality of care. 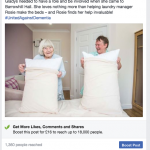 We planned a serious of Facebook posts over a two-week period that focused on the care and expertise the home provides to people with dementia.

The aim of this “Acccelerated Facebook Engagement” was to raise awareness of the home in its local community, as well as establishing a positive reputation for the home among those from whom referrals are likely to come from.

Secondly, we sourced eye-catching photographs from the home that ‘told the story’ of the relationships its residents had with staff.

What’s guaranteed is that family members and staff colleagues are more keen to ‘like’ and comment on such positive photographs and, indeed, videos.

Thirdly – and the secret ingredient – we incorporated a fundraising element to the campaign that encouraged Facebook users to ‘share’ all of the home’s Dementia Awareness Facebook posts.

For every ‘share’ of a post the home pledged to donate £1 to the Alzheimer’s Society and Approach Staffordshire, a local organisation for people with dementia or mental health needs.

Involving these organisations through links to their Facebook pages and relevant hashtags generated further reach and established relationships that the home could leverage in the future. 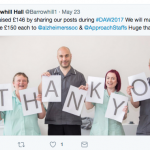 It’s all about ‘engagement’ on Twitter for care providers….

We also partnered the Facebook promotion activity with pre-planned Twitter posts. In the week prior, the home’s tweets earned 33 impressions per day.

During the Dementia Awareness week, this rocketed 700% to 198 impressions per day.

Moreover, because the home’s Facebook page has generated such vitality and local people are getting to hear of the quality of care, the home is getting more direct enquiries via its Facebook page about job vacancies, and so has cut costs on recruitment agencies.

* Want a PR And Digital Marketing Audit and Success Plan for your care provider?