How Springup PR created the “best press release ever”!

Founder of Springup PR
How Springup PR created the “best press release ever”!

Can Springup PR ever credit itself to creating the best press release ever?

We left that to BBC presenter Mollie Green who, live on her radio show, described one of Springup PR’s media pitches as the “best press release ever”. 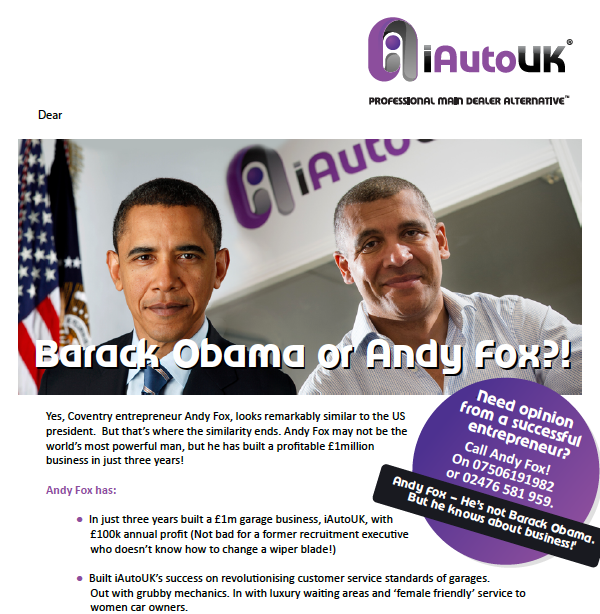 The “best press release ever”, according to the BBC

It all started when we were  keen to produce an eye-catching media pitch on behalf of our client, entrepreneur Andy Fox, who heads national car-servicing franchise iAutoUK.

During a phone call to Andy, he told us he is often told he resembles Barack Obama.

This sparked the idea to distribute a quirky, well-designed A4 flyer to target media.

The flyer included details of Andy Fox’s business success, photos of Fox and Barack Obama, and the tagline: “Need opinion from a successful entrepreneur? Call Andy Fox – He’s not Barack Obama. But he knows about business.”

On receiving the posted flyer, BBC Coventry and Warwickshire radio asked Andy Fox to come into its Coventry studio for an interview.

While trailing the live interview on July 19, amused Mollie Green began praising the flyer itself, laughing: “Andy Fox – he’s not Barack Obama. But he knows about business. This is one of the best press releases I’ve ever seen!”

And here’s the proof!

Springup PR was recording the interview in the office, and our collective jaws almost dropped to our keyboards.

We do pride ourselves as being a PR agency composed of media insiders. So we like to think this proved the point.

Andy was also happy, as we did secure him a 10-minute interview on the success of iAutoUK.

* Don’t forget, sign up to one of Springup PR’s FREE no-obligation PR audits