We were at the National Entrepreneurs’ Convention in Birmingham this year.

At the event Nigel Botterill, marketer and one of the UK’s leading entrepreneurs,
described how one piece of media coverage for his wife’s then fledgling business, My Mag, led to directly to a “£1/4million of sales in five weeks” 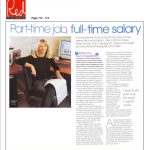 “This was such a massive thing for her business,” said Nigel who during the convention praised the impact PR can have on building a business’s profile and reputation among target audiences and customers.

“PR gets your name out there,” enthused Nigel.

And, as Nigel documented, a carefully thought-out PR strategy can lead directly to BIG sales.